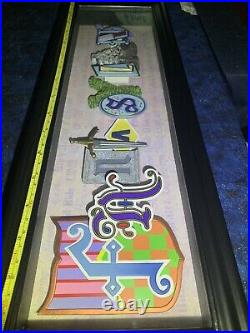 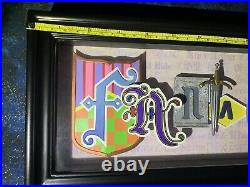 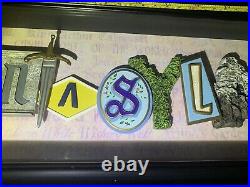 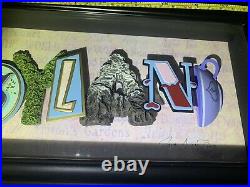 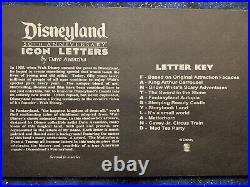 Anniversary Fantasyland Icon Letters Shadow Box by Dave Avanzino. The glass-enclosed shadow box and interior artwork are in excellent condition. These are photos of the actual item you will receive. The shadow box measures approximately 18 ¾ wide by 6 ¼ tall by 1 ¾ deep. Form the back of the shadow box. F: Based on original attraction facades. A: King Arthur Carrousel. N: Snow Whites Scary Adventures. T: The Sword in the Stone. S: Sleeping Beauty Castle. L: Its a Small World. D: Mad Tea Party. In 1955, when Walt Disney opened the gates to Disneyland, he hoped to create something special that would touch the lives of young and old alike. Today, fifty years later, millions of people of all ages continue to enjoy Walts special park every year. The unique blend of art, storytelling, theater and film have combined here to not just entertain, but to immerse Disneylands Guests into an entirely new world. Often copied, but never duplicated, Disneyland remains a living testimony to the creative vision of its founder Walt Disney. In Fantasyland, the happiest kingdom of them all, youll find enchanting tales of childhood adapted from Walt Disneys classic animated films. In this shadowbox artwork, designed by Disney collectible artist Dave Avanzino, many icons of this magical land, both past and present, are represented in the letters of its name. Each letter is hand-painted and floated over a background featuring the names of this lands many attractions. Even a teacup all become letters in this unique piece that celebrates the history and creativity of a true American classic Disneys Fantasyland. The item “Disneyland 50th Anniversary Fantasyland Icon Letters Shadow Box by Dave Avanzino” is in sale since Wednesday, May 5, 2021. This item is in the category “Collectibles\Disneyana\Contemporary (1968-Now)\Theme Park Souvenirs”. The seller is “bluemountainllc” and is located in Alpharetta, Georgia. This item can be shipped to United States.